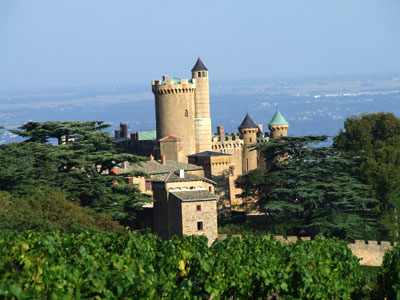 And more than a century with Mommessin!

An historic partnership has linked the house of Mommessin to the Château de Montmelas wine estate since 1904. The fruit of this hundred-year-old liaison is nowadays enjoyed with renewed pleasure, vintage after vintage. Proof, if any was needed, that carefully selected Gamay can produce wines of character with good ageing potential.

The Beaujolais Villages from Château de Montmelas 2011 is a perfect example. It is one of the favorites of winemaker François Jaubert, who gives us his verdict on the wine:

“A very complex wine with black fruit flavors and a slight floral touch underscored by notes of sweet spices. The tannins are soft and velvety, enveloping the overall structure. On the finish, the wine continues to develop into red fruit flavors. An indulgent wine that will perfectly accompany white meats, roasts, or meat in sauce; soft cheeses; or even pizzas and barbecues.”

Since its founding in 1865, the house of Mommessin has selected and vinified Gamay, the sovereign varietal in the Beaujolais. Numerous partnerships have been forged over the years, but the oldest of these is with the Château de Montmelas.

This former medieval fortress dating from the 10th century, which once belonged to the seigneurs of Beaujeu, was acquired in 1566 by the family which still owns it today, 446 years later, and which started wine production on the surrounding land.

The estate today covers 55 hectares on the slopes around the Château. The vineyards are planted at a density of 10,000 vines per hectare, as in Burgundy, pruned either in the traditional free-standing goblet, or as a “cordon de Royat” with trellising.

Harvesting is done by hand and the wine made according to the traditional Beaujolais method, with semi-carbonic maceration lasting between eight and 15 days, with devatting during fermentation for gentle extraction of flavors. The wines are aged in concrete vats after malolactic fermentation.

Mommessin wines are available in France and abroad from wine specialists and restaurants.