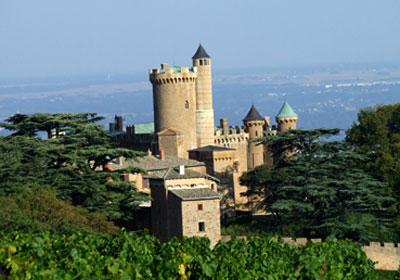 Since its founding in 1865, the house Mommessin has selected and vinified Gamay, the sovereign varietal in the Beaujolais. Numerous partnerships have been established, based on trust, deep mutual respect and ever-renewed motivation. These partnerships have been forged over the years, but the oldest of these is with the Château de Montmelas.

This former medieval fortress dating from the 10th century, which nonce belonged to the Seigneurs of Beaujeu, was acquired in 1566 by the family which still owns it today, 446 years later, and which started wine production on the surrounding land. The estate today covers 55 hectares on the slopes around the Château. The vineyards are planted at a density of 10,000 vines per hectare, as in Burgundy, pruned either in the traditional free-standing goblet, or as a "cordon de royat" with trellising. Harvesting is done by hand and the wine made according to the traditional Beaujolais method, with semi-carbonic maceration lasting between 8 and 15 days, with devatting during fermentation for gentle extraction of floavours. The wines are aged in concrete vats after malolactic fermentation.

Like Château de Montmelas, other prestigious Domaines and Châteaux contribute to our quest for excellence and share our hight standards of quality.